WHAT DOES OUR VILLAGE
HAVE TO OFFER? 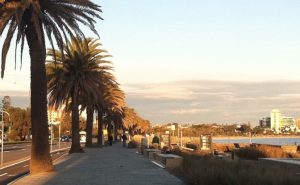 Port Phillip is blessed with beaches, parks, gardens, great schools, cafes and public spaces.  There is so much to see in Port Phillip and a lot more to do in creating a great place to live. There are many initiatives led by Council, the community, traders and government partners, we ensure our villages are prosperous, attractive and welcoming places for everyone.  In here you can participate in making your area a great place to live for all ages.  Be part of it!

There are five public library resources for you in Port Phillip. Take the opportunity to visit, invest in your English knowledge and learn about our history.

Council is committed to preserving our heritage, valuing the past and planning for the future. The City of Port Phillip offers local history and heritage services and a range of research resources through the activities of several departments across the organisation.

There is 11.6 kilometres of foreshore stretching from Port Melbourne to Elwood in the City of Port Phillip. Come for a walk! Have a cup of Coffee! Play beach Volleyball or just enjoy the sunset… and much more.

The City of Port Phillip is home to some of the most well-known festivals and events in the country. Check out what’s going on in Port Phillip.  ABRISA hosts some of its activities such as: Kids Carnaval, BBQ TChe, Children’s day, Caldos e Sopas and others.

The vision of the Neighbourhug program is to enable migrants to be their own ethnic local Latin American communities in Melbourne. This simple web connection can make the Brazilian and Latin American community stronger as it allows for immediate connectivity within the Melbourne Local Government Areas.  The Activities consists of research information on each Council web pages, selecting key services that will ease their settlement process, make them feel welcome and encourage them to participate in local activities. Once the research is completed, the information will be translated from English into Spanish and Portuguese.  The web pages developed and hosts are volunteers selected by ABRISA to welcome the arrival and connect them to the broader community.

Why the need to
CONNECT?

Soon after we land and settle, feelings of longing and isolation sets in. The Neighbourhug is a volunteering effort set up by ABRISA, bringing the ethnic community to initially support new arrivals with information and connectivity and therefore reducing isolation within our community.

Where is the city of Port Phillip
LOCATED?

The City of Port Phillip is located in Melbourne’s inner southern suburbs, between 2 and 8 kilometres from the Melbourne GPO. The City of Port Phillip was formed in 1994 by the amalgamation of the three former cities of South Melbourne, St Kilda and Port Melbourne.  European settlement in each of these cities dates from the mid 19th century. Grand architecture and worker’s cottages, community organisations, arts organisations and cultural sites together with sporting groups and grounds are still present today. Each city was renowned for its individual identity .

The earliest inhabitants of the area now covered by the City of Port Phillip were the Yalukit Wilum, one of the five clans of the Boon Wurrung, known as the coastal tribe, and who were members of the Kulin nation.  Today the City of Port Phillip has a diverse community with the three largest ancestries in City of Port Phillip in 2011 were English, Australian and Irish. The Latin American population in listed as follows: Brazil (169), Colombia (163), Chile (143). The Portugal is also listed with 149 residents.